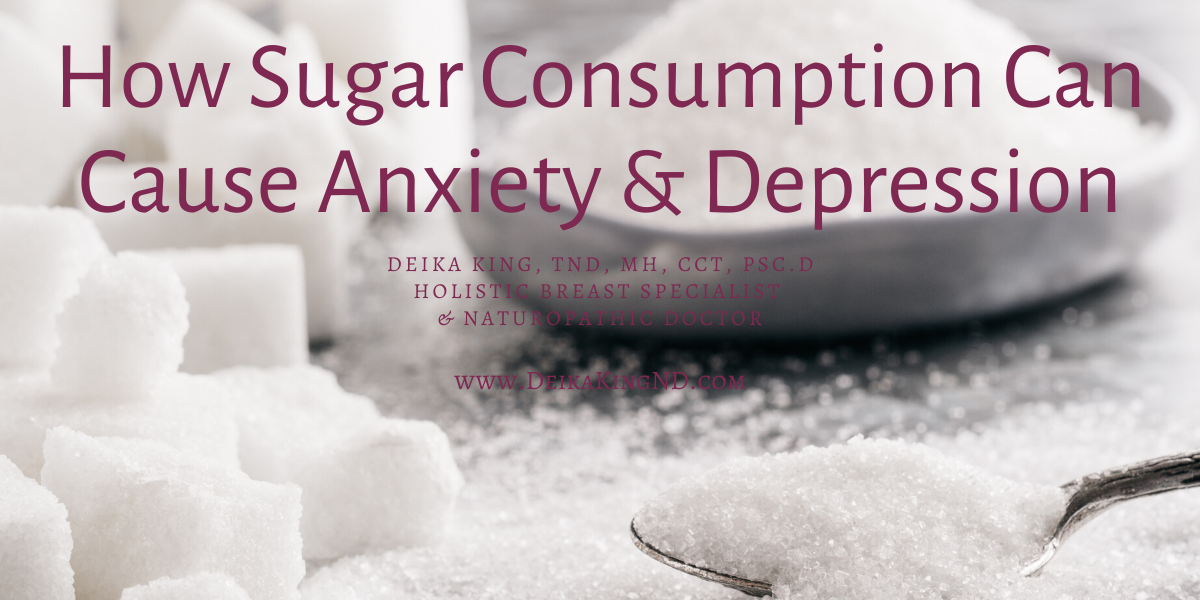 Numerous studies have created a wider understanding of the damaging effects sugar can have on physical health.  But not as many people are aware of the impact that sugar can have on their mental health.  In addition to causing an inflated waistline, and chronic diseases, high sugar consumption can increase the risk of anxiety and depression.  Sugar acts in more ways to negatively affect our physical, emotional and mental health.

Sugar creates a habit or dependency that can become an addiction.  This means it not only causes problems when consuming it, but also in its absence. This is particularly true of the mental and emotional aspects of sugar consumption. Many people fall back on sweets, treats and caffeinated soft drinks as comfort foods and mood elevators.

The dependency on sugar has been described as a drug or alcohol addiction. The withholding of sugar from those who have created a dependency for themselves can cause feelings of anxiety and stress. This can evolve into depression and in extreme cases, schizophrenia.

High sugar consumption causes sudden peaks and troughs in a person’s blood glucose levels. Something as seemingly benign as a bottle of soft drink can cause a blood sugar spike leading to a ‘sugar crash’.

Persistent and repeated sugar spikes and slumps can cause irritability, insomnia, fatigue, profuse sweating and excessive thirst. In addition, sugar slumps will add to the difficulty of focusing on a given task as well as poor memory. To overcome this, those affected often treat the problem with another sugar hit.

A high intake of sugar elevates the levels of blood insulin which in turn will also raise the levels of endorphins in the system.  This is why we have a feel-good response in the short-term.  Again, like most things that affect our emotional stability, resistance becomes an issue. This means it takes increasingly more sugar to achieve the same effects, while the increasing amounts do more and more damage.

Our brain works constantly to maintain homeostasis in our entire system.  If anything spikes or affects the balance, it acts to restore normality. Chronic sugar consumption can cause some of the brain’s endorphin sites to close in order to control the amount of endorphins that are released. Again, this means that between sugar hits endorphin output can be restricted when it is most needed.  Unfortunately, reduced levels of endorphins have a causal effect on anxiety and mild to severe depression.

A British Psychiatric researcher named Malcolm Peet conducted a research regarding the link between a person’s diet and the emergence of mental illnesses. Some of the initial findings of his research indicate a very strong connection between sugar consumption and higher risks of depression and schizophrenia.

The toxic effects of sugar, specifically refined sugar, was found to be responsible for suppressing the activity of growth hormones called BDNF which are crucial for the development and proper functioning of the brain.

Research showed that people who have been afflicted with the symptoms of depression were found to have low levels of BDNF. Reduced levels of BDNF can adversely affect the development and growth of neurons resulting in poor communication and functioning of brain cells.

Another factor that strongly links sugar consumption to depression is the ability of sugar to cause chronic inflammation. This will also cause disruptions in the normal functioning of the immune system that can adversely impact your brain and increase your risk of depression.  Sugar not only helps other toxins to enter the person’s brain through indirect gut inflammation but it can also enter the blood brain barrier.

This will then lead to the release of cytokines into the brain which causes an inflammation response. The presence of inflammation in the brain can adversely affect the proper functioning of neurotransmitters particularly in the hippocampus thereby affecting one’s mood, memory, learning and reduced ability to perform other functions.

Decreased Consumption is a Must

If you affected by mood swings, anxiety or depression, strongly consider that your diet may be playing a big part. Monitor your eating behaviors, especially those induced by stressful events. Be more mindful of your unconscious behaviors and take steps to reduce your sugar intake if you suspect it is adding to your problem.