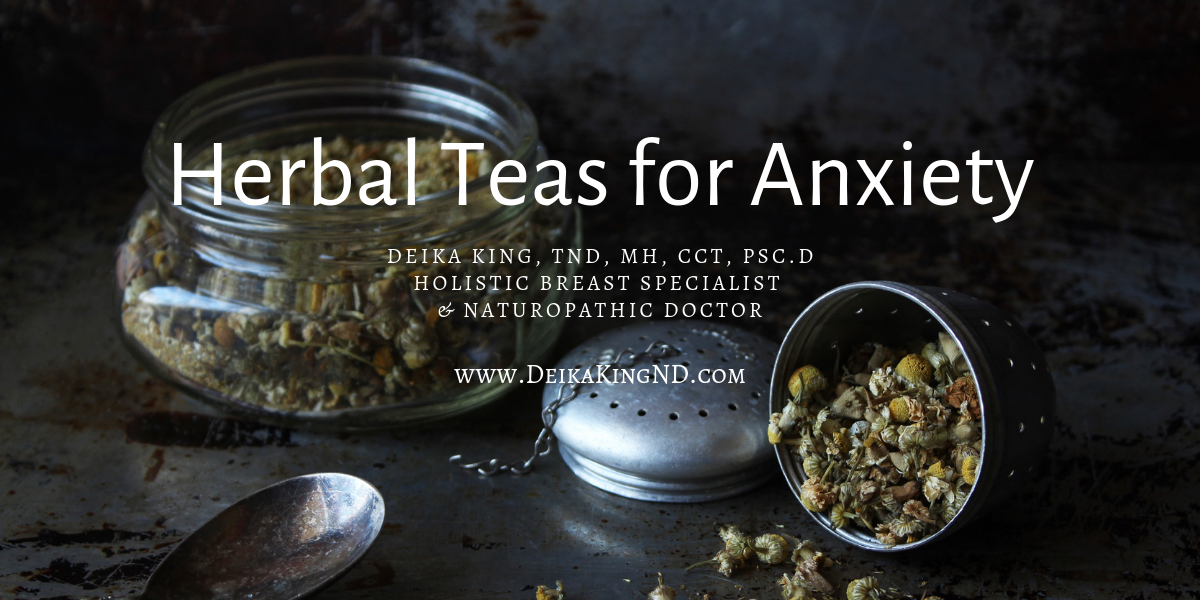 Anxiety symptoms can leave a person debilitated and fearful of even leaving their home. The feeling itself can really have a major impact on overall well-being.  Especially for those who suffer at a chronic level and have to deal with it on a regular basis. It can cause exhaustion, and negatively impact one’s qualify of life. Anxiety is also a major cause of depression.  And often those diagnosed with any type of anxiety condition also suffer from depression.

Conventional medicine typically uses prescription medication and psychotherapy to treat anxiety and anxiety based disorders. However, many natural complementary therapies can also be of great help. It is well worth the effort to explore these options in order to avoid becoming addicted to prescription drugs.

There are a number of herbal teas and other plant botanical treatments that can leave you calm.  And helps to alleviate the nervous feelings associated with anxiety.

Herbs have been used for centuries to alleviate numerous ailments and help with various medical conditions. They are natural options to addictive medications and can be used as a complementary therapy in treating anxiety disorders.

Most herbal remedies come from the Far East, while others were developed in Europe and in the Pacific Islands.

The best ways to reduce anxiety with the use of botanicals are as follows:

1.Passionflower.   This herb works as well as the addicting benzodiazepines available by a prescription from your doctor. One well-designed study showed that passionflower reduced anxiety over a four-week period; the herbal remedy was just as effective as a popular anti-anxiety medication. It is useful in treating agitation, irritability, depression, and withdrawal from opiates. Teas and liquid extract drops are ideal ways of consumption.

2. Lavender.  A recent study showed that lavender relaxed people and controlled many of the symptoms as well as the prescription medication Ativan on patients who had generalized anxiety symptoms. Lavender is inhaled or taken in supplement form.

3. Lemon Balm. Lemon balm is used in aromatherapy, in dropper liquid form, and in baths or taken as a dried herb. It reduces anxiety after only a single dose.

4. Ashwagandha.  This is a standardized supplement for the relief of anxiety symptoms. Several studies showed reductions in the stress hormone cortisol and a reduction of related symptoms with Ashwagandha. Ashwagandha does not produce side effects, regardless of how long it is consumed.  In one study, it compared favorably with Ativan.

5. L Theanine. L-theanine is a water-soluble amino acid that is found in both black tea and green tea. This can be taken as a tea or as a regular capsule supplement. It is non-addictive and has no sedative side effects. It is believed to act directly on brain structures to lessen anxiety and stress-related symptoms.

6. Kava.  This root powder was originally used in religious ceremonies on many Pacific islands, because it induces a calm that helps release anxiety. Kava is not taken as a tea, but instead in capsule form for the reduction of anxiety.

Herbal remedies have some special properties not found in anxiety-relieving benzodiazepines. They are all natural supplements with many centuries of successful use. They are also non-addicting and are gentle on your system. Herbal tea is a safe and easy way to maintain feelings of calm on a daily basis.

Herbal teas and the practices described above help relieve some symptoms, without addiction or unwanted side effects. Talk with your doctor before trying them so you know they won’t mix badly with other medications you are taking.

For the most part, they have no side effects. However, it is important to realize that herbs can interfere with sedative medications, so caution should be taken, ask your doctor or an herbalist before starting use.

Is Breast Cancer Prevention Within Your Reach?
October 28, 2019

The Role of Diet in Breast Cancer Prevention
October 21, 2019

What are Carcinogens and How To Avoid Them
October 14, 2019
Recent Blogs
Categories
Go to Top